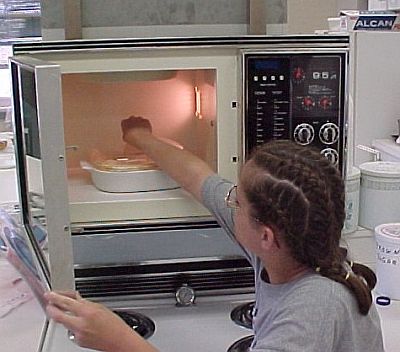 Sure using microwave is convenient and saves time by heating your food just in seconds, however, have you ever pondered on the hidden ill-effects of it? Microwave boosts electricity bill and destroys the nutritional values of food. By doing so carcinogenic toxins may leach into your food, through the packing material. Vegetables may loose their valuable nutrients. The chemical structure of the food too changes.

Microwave destructs and deforms the food molecule. A study published in the November 2003 issue of The Journal of the Science of Food and Agriculture found that broccoli “zapped” in the microwave with a little water lost up to 97 percent of the beneficial antioxidant chemicals it contains. By comparison, steamed broccoli lost 11 percent or fewer of its antioxidants.

One must cook the food in the traditional manner rather than in a microwave. Besides the loss of nutrients, microwaving forms new compounds (radiolytic compounds) that are unknown to humans and nature. It’s not yet known exactly what these compounds do in the human body. It will likely be a difficult thing to sort out, especially when there are previously unknown compounds being introduced to humans from a variety of sources such as new food products (i.e., olestra) and genetically modified foods.

The food cooked in a microwave induces some carcinogenic compounds leading to disastrous diseases. The milk or the bottles of the infants should not be boiled/ heated in the microwave. As by doing so we are plunging our infants to death. However, the continuous luring by microwave oven manufacturers and plain old human nature are suppressing the facts and evidence. Because of this, people are continuing to microwave their food – in blissful ignorance – without knowing the effects and danger of doing so.